How to prevent useEffect from running on mount in React 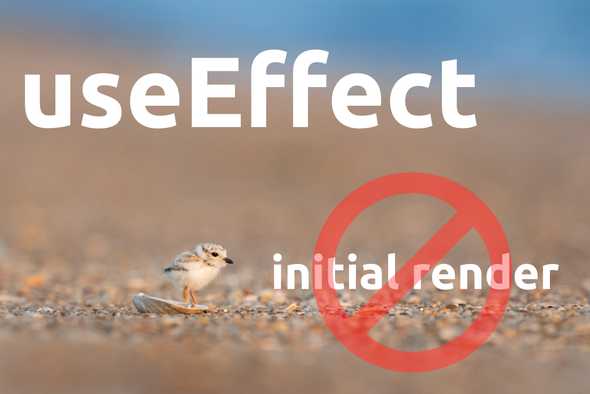 Sometimes we don’t want a useEffect hook to run on initial render. This could be for many reasons, but a common use case is when we’re fetching the data on which that hook depends. Initially, the data is empty, so running that hook is pointless.

In the following component, we fetch some data and then we intend to doSomething with that data after it’s been fetched.

On initial render, we fetch the data, but we also run our second effect.

Important: the useEffect hook will always run on mount regardless of if there is anything in its dependency array.

We probably don’t want to actually run this effect on our data when it’s undefined (as it will be on initial render) but rather we want to wait until it is populated from the API call.

One solution to this problem is employing the useRef hook to track whether the component has mounted or not. While a ref is often thought of as a way to gain reference to DOM elements, it can also be used to refer to other objects and primitives.

In this case, we’ll create a ref to a boolean that tracks whether the component has mounted. It will start out as false, but once the effect runs for the first time, we can change it to true.

This is probably much easier to understand as code:

There are a few nice things about using a ref for this purpose:

The useEffect hook can be particularly challenging. By understanding the useRef hook, we can gain a bit more control about when our effects are run.