Is It Too Late To Be a Software Engineer? 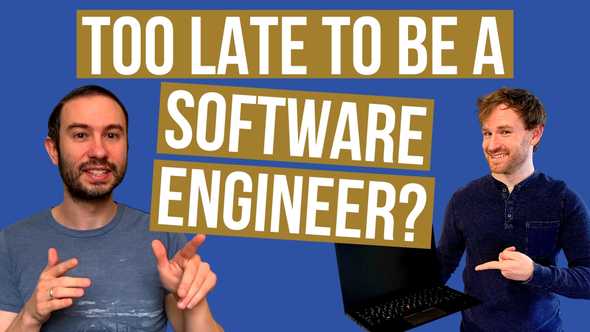 I wrote this post with my good friend, Ross Jacobson, who runs The Disciplined Rebel.

A lot of people ask me “is it too late to be a software engineer.” In this post, we are going to examine this question, and determine at what age it is too late to get into software development.

This question, “is it too late to be a software engineer” comes from a surprisingly wide variety of age groups.

Some are in there 30s, 40s, or older. Whereas others are in their 20s. But still feel they’ve gotten off to a late start.

At one point I was hearing this question from people of different ages, and I came to a realization:

It’s not about your age.

Imagine Someone in Their 30s Who Wants to Learn to Code

(If you personally are in your 30s, then this should be even easier).

The 30-something really wants to become a software engineer but wonders whether it is too late to learn how.

The person in their 30s has two options:

Here’s the thing though: Someone in their 40s has these same options available to them.

The person in their 40s could focus on the future and get started now. Which might lead them to gain additional fulfillment, success, and/or income.

Or they can never give it a shot because they feel like “it’s too late.” Then, when they are in their 50s, regret not having started in their 40s. And so on and so forth.

You can repeat this thought experiment with your age subbed in.

My friend, Ross Jacobson, started playing guitar around 9th or 10th grade. Now that he is in his 30s, that seems really early.

But at the time, he knew other people who started in 5th or 6th grade. Because he compared himself to others, he felt regret. And that caused him to question whether it was too late for him to get any good.

Fortunately though, he kept persisting, and he eventually got better. He ended up playing in a band for several years and got a lot of joy out of it.

Now at his current age, looking back, he thinks that 9th or 10th grade seems plenty early. And the idea that he didn’t start early enough seems completely ridiculous.

The thing is – that same level of ridiculousness can be applied to ANY age!

Let’s say you are 34 and want to become a software engineer. But don’t because you think it is too late.

10 years later you will look back and wonder why you didn’t.

Future You, at 44, will think “ugh, if I had only gotten into software development when I was 34, I’d be so far along by now.”

Here’s the Rule to Keep in Mind

Are there any limits?

Sure, there are some practical situations to factor in. Such as:

Some of these practical problems seem to have clearer solutions. For example, there are lots of free courses and other resources that can help mitigate cost (such as this blog).

Other are tougher. For instance, having less time to learn to code, because you have to devote a lot of your time to taking care of a family member.

But all of these concerns can be present for people regardless of their age.

Age itself is just a number.

If you are still on the fence, there are plenty of real-world examples of people in their 30s, 40s, and beyond who learned to code late in life.

Yes, there are some practical factors you have to consider.

But most of those considerations have less to do with age, and more to do with where becoming a software engineer fits on your list of priorities.

So, if you are wondering whether it is too late to become a software engineer, here is my answer:

Don’t worry about past missed time. And start looking to the future.

Years from now, Future You will look back and thank you for it.

I'd appreciate your feedback so I can make my blog posts more helpful. Did this post help you learn something or fix an issue you were having?

Join 2,076+ other developers and get free, weekly updates and code insights directly to your inbox.